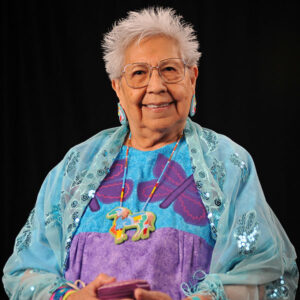 Hoosta-oo-nah’e, “The Woman Who Comes to Offer Prayer” or “Prayer Woman”

Dr. Henrietta Mann, Tsetsehestaestse (Cheyenne) was Director/Professor in Native American Studies at the University of Montana, Missoula for 28 years. In 2000, she became the first individual to occupy the Katz Endowed Chair in Native American Studies at Montana State University, Bozeman where she is Professor Emerita, and was Special Assistant to the President from 2003-2016. She is the founding President of the Cheyenne and Arapaho Tribal College.

In 1991, Rolling Stone Magazine named Dr. Mann as one of the ten leading professors in the nation. In 2008 she received the Lifetime Achievement Award from the National Indian Education Association. The College Board, Native American Student Advocacy Institute (NASAI) presented her with its first Lifetime Achievement Award in 2013, and has since created the Dr. Henrietta Mann Leadership Award to acknowledge and thank leaders for their advocacy in improving lives within native communities. In 2014 MONEY Magazine named her a MONEY Hero Award Winner, one of 50 Unsung Heroes/50 States, conferred for her extraordinary work with the Cheyenne and Arapaho Tribal College in improving the financial well-being of others.

In 2016, she became one of two Native Americans ever to be elected to the National Academy of Education. Indian Country Today has included her in its 2016 “50 Faces of Indian Country.” In 2017, she received a SPIRIT ALIGNED Legacy Leader Award as a carrier of Indigenous community values, memory and wisdom from the Spirit Aligned Leadership Program, based in Akwesasne, New York, which partners with NoVo Foundation and Rockefeller Philanthropy Advisors. In 2018, she was elected to membership in the American Academy of Arts & Sciences.

Dr. Mann continues to serve on boards at the national and international levels, and has served as Elder-in-Residence at Fort Lewis College, Durango, Colorado, and the University of North Carolina, Chapel Hill. 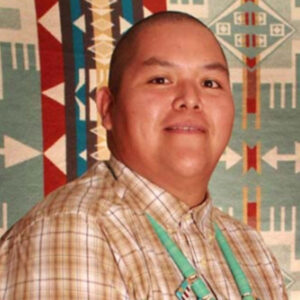 Brian Monongye is from the village of Mungapi on the Hopi Reservation. He serves as the Vice Chair for Seventh Generation Fund and has been with the organization as a board member for over seven years. He is an artist, farmer and active community member. Brian is engaged in issues affecting his homeland, from issues concerning water to mining resources.

Brian has advocated for Indigenous Peoples’ issues from national to international arenas. Currently, he is the Hopi Liaison for the Bears Ears Prayer Run Alliance which focuses on the Bears Ears issue. The Alliance seeks to unite the tribes who hold this area sacred by coming together as one through the power of running. Further, he is also currently coordinating relief efforts for his village during this time of covid. Kwa Kwaii 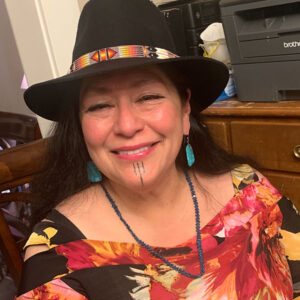 Deborah Sanchez is Chumash, O’odham and Raramuri American Indian. Deborah was the co-chair of the Barbareño Chumash Council for more than 10 years and worked to maintain the annual ceremony of the Chumash crossing the ocean channel, in their traditional canoe from the mainland to Limuw (also known as Santa Cruz Island). She organized and coordinated the island side of this annual event for more than a decade, until 2017.

During her career as an attorney, Deborah was a volunteer for the Southern California Indian Center, handling issues ranging from Landlord-Tenant cases to the Indian Child Welfare Act. She was an attorney for nearly 20 years and has prosecuted child exploitation cases and hate crimes. She is now a Superior Court Judge in Los Angeles.

In addition to being acknowledged throughout her career as an attorney, Deborah has received community service awards from the American Indian Scholarship Fund (2007) and Project Amiga (2007); a Distinguished Alumni award from California State University, Long Beach (2008); was honored as one of the distinguished Native Americans by Southern California AIM and the California Indian Education Association (2012); the public service award from the Latino City Attorney’s Association (2013); received the Educational Service Award from Pukuu, an American Indian nonprofit (2015); the Heritage Award from the Aquarium of the Pacific for service to the Native American communities (2016); and was selected as one of the ground-breaking stories for the Los Angeles County Law Library’s upcoming documentary (2016). 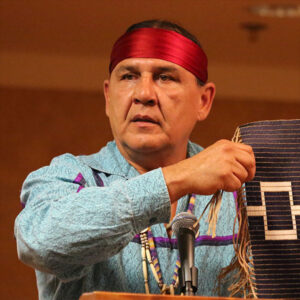 Jake Haiwhagai’i (He speaks with strong voice) Edwards, Onondaga Eel Clan, lives on the Onondaga Nation Territory. He maintains the continuity of the Longhouse oral teachings. The Onondaga govern and teach within an oral tradition that is over a thousand years old. Jake is the 11th child in a family of twelve children. He grew up among his elders of the Onondaga Nation learning and sharing the messages from the original instructions, passing on history and knowledge of the natural world.

Jake was appointed by the Grand Council of the Haudenosaunee Confederacy to the Haudenosaunee External Relations Committee to respectfully work on political and governmental structures beyond the borders of Haudenosaunee Country. This work includes diplomatic work at the United Nations and other entities outside the Confederacy. He is a board member of the Seventh Generation Fund for Indigenous Peoples and a board member of the Indigenous Values Initiative. Jake was one of the primary voices leading the 400th anniversary (1613 – 2013) of the Two Row Wampum Campaign, in which people in canoes paddled the waterways from the Onondaga Nation Territory to the United Nations in NYC, teaching people at stops along the way.

He actively reminds people of the significance of our treaties and reflects upon decisions that will protect the people into the seventh generation. Jake explains how wampum laid the foundational principles and structure of the United States Constitution. 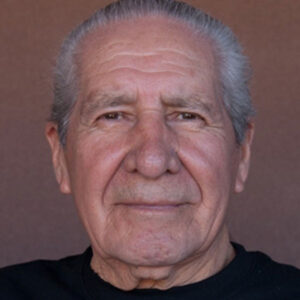 Oren Lyons is a faithkeeper of the Turtle Clan, Onondaga Council of Chiefs, Haudenosaunee (Six Nations Iroquois Confederacy). He has been active in international Indigenous rights and sovereignty issues for over four decades at the United Nations and other international forums. He is a State University of New York (SUNY) distinguished services professor emeritus of the University at Buffalo. 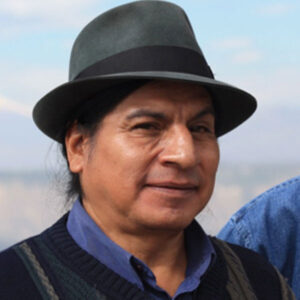 Dr. Luis Macus is director of Instituto Cientfico de Culturas Indigenas (ICCI). The ICCI seeks to improve the quality of life for Ecuadorian people by integrating into society, at large – the wisdom, values, and worldview of Ecuadorian Indigenous Peoples through the creation and implementation of South America’s first Indigenous University in Quito. He is also the president of the Confederation for Indigenous Nationalities of Ecuador (CONAIE). 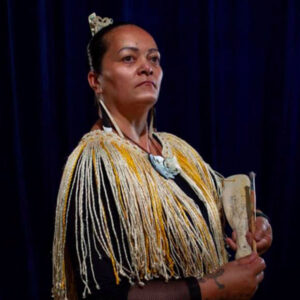 Tāwera Tahuri is a mixed media artist covering a wide range of mediums and techniques. She is a mother of six children and grandmother of four. Tāwera is actively involved in a local, national, and international stage as an artist, teacher, and performer.

The Treaty of Waitangi Land Claim WAI 507 has been an integral part of the revitalization of her People and this has been the basis of her recent bodies of work. The Seventh Generation principle is an important component of the people of Tamanui (the eponymous ancestor of Ngā Ariki Kaipūtahi who never ceded) as it serves not only as a reminder of the wrongs of the past but also the hopes and aspirations of the future seven generations.

Tāwera is passionate about freshwater ways and is actively involved in the care and maintenance of sacred waterways and takes her role as a ‘kaitiaki’ or guardian seriously. Ko au te wai, ko te wai ko au (I am the water and the water is me). As a board member for the Seventh Generation Fund for Indigenous Peoples, Tāwera is committed to Indigenous issues across the world and proudly represents her Peoples alongside her wider Indigenous family.

Tāwera is currently in the final stages of her Phd in Indigenous Studies with Te Whare Wānanga O Awanuiarangi. She also holds a BA from Toihoukura and MMVA from Massey University, NZ.

Christopher Peters (Puhlik-lah/Karuk) has more than 50 years of experience in grassroots community organizing. He was first employed with Seventh Generation Fund in 1989 as a Senior Program Officer. He later became the Executive Director in 1990, and subsequently, in 1999, he was appointed as SGF’s President and CEO. For over 31 years he has served the organization and remains its President. His work is especially focused on climate change, sacred sites protection, and the renaissance of sacred knowledge and Earth Renewal ceremonies of Northern California Tribal Peoples.

Chris is also the owner and Principal Consultant for Red Deer Consulting; an independent firm that provides identity based cultural advising, mentoring and capacity building services for tribal communities. Chris serves as the Indigenous Peoples’ Task Force Chair, and as a Board member of the Parliament for the World’s Religions. He has also earned a BS degree from the University of California at Davis in Native American Studies, and a MA degree in Counseling Psychology from Stanford University. 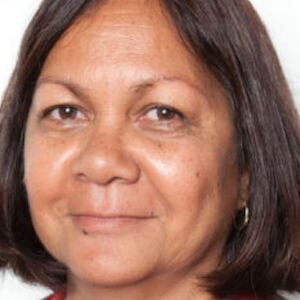 Sandra Creamer is a Waanyi/Kalkadoon Indigenous woman from Australia. Sandra is the CEO of the National Aboriginal and Torres Strait Islander Women’s Alliance, Lawyer and Adjunct Professor in Public Health at the University of Queensland.

Sandra was awarded a Member of the Order Of Australia (AM) award on the Queens Birthday 2019 by the Attorney General of Australia for her work with Indigenous women and peoples.

Sandra is an advisor for the Seventh Generation Board Fund, on the Board of the International Indigenous Women’s Forum and on the Advisory team for the Queensland Human Rights Commissioner. 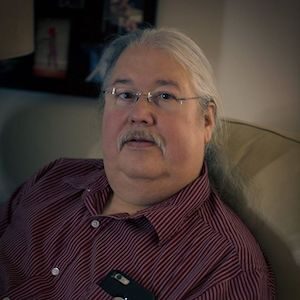 Russell Diabo, born on December 25th 1955, is a son of a Kahnawake Mohawk Iron Worker and is a member of the Mohawk Nation at Kahnawake.

Russell has worked for Indigenous rights for more than 40 years and has served at the AFN as an advisor to two National Chiefs. As a writer and editor of the First Nations Strategic Bulletin he has been covering the development of Indigenous policy in Canada for the past 20 years and is recognized as one of the foremost Indigenous policy analysts in the country, while at the same time he has continued to work with the bands at the community level and with Indigenous activists in Defenders of the Land, which he co-founded with Arthur Manuel in 2008.

Russell was present at Wounded Knee during the 1973 stand off when he was 17 years old. He then went on to study Native issues at U.C. Berkeley, Trent University and Laurentian University. He also took graduate courses in American Indian Policy Studies at the University of Arizona with the great Indigenous scholar Vine Deloria Jr.

Russell was the AFN Indian Act Amendments Coordinator from 1996 to 1997, under the leadership of then National Chief Ovide Mercredi. In 1997, he worked in B.C. as the Research Director for a Traditional Use Study conducted by the Secwepemc communities of Neskonlith and Adams Lake. Following the completion of that project he became Executive Liaison between the Interior Alliance of Indigenous Nations, led by Chief Arthur Manuel, and the Union of B.C. Indian Chiefs, led by Grand Chief Stuart Phillip.

Married for 30 years to Joanna Anaquod from Treaty #4, Saskatchewan, they have 5 children between them. Russell and Joanna are also proud grandparents of six grandchildren. 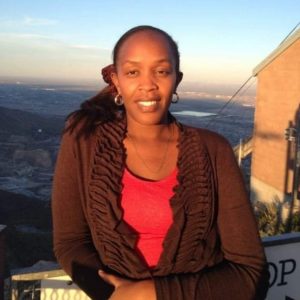 Naomi is a mother to two teenagers. She is from the Maasai community found at the Southern part of Kenya.

Naomi is the Coordinator for Global Indigenous Grantmaking at Global Greengrants Fund (GGF) where she shares collective learning about inclusive grantmaking that supports the rights, self-determination, and environmental work of Indigenous Peoples. Prior to joining GGF, Naomi advocated for effective implementation of constitutional provisions for secure women’s land rights in Kenya.

She has a Master in Legal Studies from the Indigenous Peoples Law and Policy Program at the University of Arizona and an MBA from Jomo Kenyatta University of Agriculture and Technology. 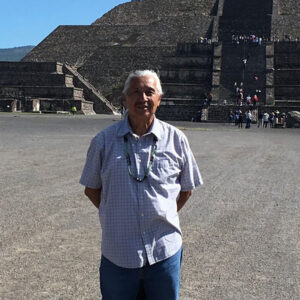 Edward Wemytewa is a member of the A:shiwi (Zuni Nation), a cultural linguist/artist, and the founder of the Idiwanan An Chawe Theater. The Idiwanan An Chawe Theater was founded by Edward in the mid 1990’s as a means to create and present art dealing with contemporary issues facing the Zuni Tribe. As such Edward’s plays evoke a sense of identity, dealing with education environment, and health issues that affect the community and convey information in a creative and enriching way.