Being a Good Ancestor

The Seventh Generation Fund recognizes that the teachings shared in this publication come from traditional Cheyenne knowledge and wisdom keeping and through Henrietta’s contribution and leadership is shaping Seventh Generation Fund’s principles, organizational framework and program methodology as we look forward to our next forty years.

About Henrietta Mann, Ph.D.
Henrietta Mann (Southern Cheyenne), Seventh Generation Fund Board Chair, greatly values Native American education, which has been the backbone of her life’s work for more than fifty years. Henrietta is sought out as a spiritual mentor, and she has prayed at ceremonies ranging from Indigenous gatherings in New Zealand to Ground Zero. Dr. Mann also prayed at Stonehenge and at Cape Canaveral when Indian astronaut John Harrington went to space. At age sixteen, she enrolled at Southwestern Oklahoma State in Weatherford, and she later earned a Master’s degree from Oklahoma State and a Doctorate from the University of New Mexico. 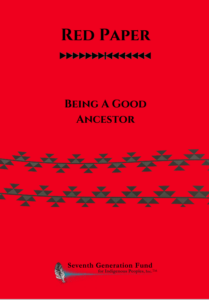 Seventh Generation Fund’s purpose is dedicated to Indigenous Peoples’ self-determination and the sovereignty of Native nations.